WHAT IS MATCHA AND WHAT MAKES IT A SUPERFOOD?

Some of matcha’s health benefits include:

You can tell the quality of your matcha by the texture of the powder. It should be as fine and smooth as talcum powder! The lower grades are also finely ground, but are more coarse than the premium quality powders. The higher the quality, the less bitter it is – it should have a smooth, slightly sweet flavour. The sweetness due to the L-theanine content. The more potent superfood matchas do, however, have a bit of an astringent quality too.

There’s a reason why matcha has been used for centuries in traditional medicinal systems.

Matcha is a fine powder made from specially cultivated, whole green tea leaves. It is known as a healthier alternative to coffee for those looking to feel energised without the acidifying effect of coffee, without the associated build-up of nervous energy and rather more clarity of mind.

Matcha has gained much more interest in the last decade as it entered the western market as a ‘coffee alternative’ or flavour enhancer, however, matcha is much more than that. In fact, it contains one of the highest levels of antioxidants obtainable in plants.

Reduces Stress & Combats Gitters: Matcha contains a high concentration of L-theanine which is an amino acid that creates a feeling of calm and reduces stress.

Mental Focus, Concentration & Enhances Memory: Matcha increases the production of serotonin and dopamine  (ie.  happy hormones or neurotransmitters responsible for a stable mood & happiness) which enhances the mind’s ability to focus and recall. The combination of the caffeine and the L-theanine creates an alertness without the nervous energy that we get from coffee which often leads to feeling ‘wired but tired’.

Detoxifying & Alkalising: Matcha gets its green colour from its chlorophyll content which has an alkalising & cleansing effect on the body.  It has the ability to remove toxins and heavy metals from the body which very few sources can do. This alkalising effect also helps minimise inflammation and disease.

Anti-inflammatory:  Inflammation is also known to go hand in hand with chronic pain and disease, and so minimising inflammation is essential for pain relief and healing.

Matcha is also considered to be the most nutritionally valuable out of all teas providing the whole tea leaf benefits of antioxidants, amino acids, vitamins, minerals, cofactors and fibre.

HOW TO USE MATCHA

The taste of matcha is somewhat bitter with a floral hint, similar to green tea.

The best way to take matcha is to have it in the morning as a tea or latte.  This can help your body maintain equilibrium in your adrenal system throughout the day and energise the mind for a full day’s work ahead. 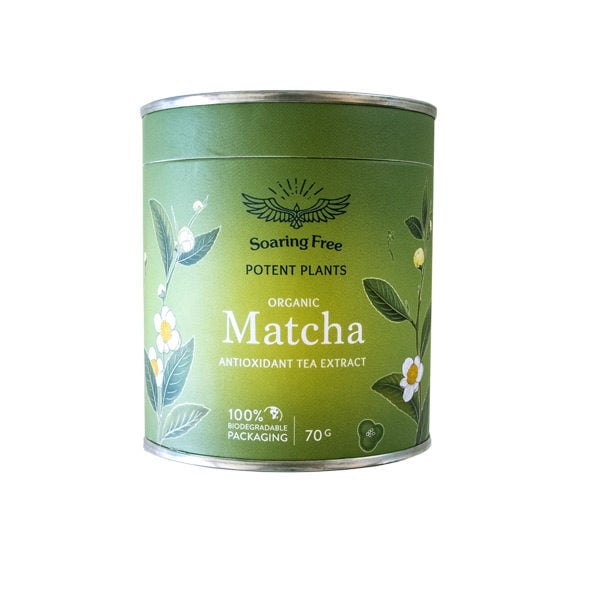 TIP:  You can add matcha to homemade chocolates for an energising & ‘deep focus’ snack.

THE SCIENCE ON MATCHA’S HEALTH BENEFITS

It is said that Zen masters were able to reach a higher state of consciousness by drinking matcha because of its ability to simultaneously boost relaxation and alertness. These effects are produced by growing the green tea in deep shade prior to harvesting which boosts the chlorophyll and L-theanine content. This process also amplifies the antioxidant content which is said to be 15 times more than wild blueberries.

In ancient Japan, it is said that the Samurai would drink matcha tea before going into battle because it provides long-lasting, sustained energy.

Matcha is the most nutritionally valuable tea because it is made using the whole leaf. It has a powerful concentration of antioxidants, amino acids and minerals.

The ability to boost memory and focus is due to the calming amino acid, L-theanine, which stimulates the production of serotonin and dopamine. It also increases your metabolism, naturally detoxifies the body and removes heavy metals.

The Tang Dynasty in China spanned across the 7th to the 10th century, and is the earliest record of matcha tea drinking. It was the Song Dynasty, which reigned from the 10th to the 13th century, that made the method of roasting and powderising the leaves before mixing with water, most popular.