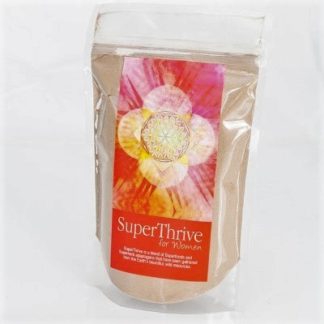 This alchemical formula supports true vitality in these high pressure times. SuperThrive helps us shift from survival mode to "thrival" mode, by healing stress damage and boosting our energy levels.

The multitasking plants of SuperThrive have many fine attributes including: adrenal, thyroid and reproductive support and regeneration, blood sugar stability, liver, kidney and heart support, antioxidant potency and much more.

These ancient longevity plants, have been married in a way to provide full healing potency combined with a palatable taste, plus the added bonus of freedom from tablets. SuperThrive is great in smoothies, medicinal chocolate, green juice or just with spring water.

No medical claims are made. Product information on this website is for information purposes only. ALL medical conditions must be treated by a qualified health care practitioner.

Mesquite - it is highly absorbable in protein (11-17%). It is also rich in lysine, calcium, magnesium, manganese, potassium, iron, zinc, and dietary fibre, it balances and stabilizes the blood sugar. Mesquite is also highly effective in balancing blood sugar. Because its sugar is in the form of fructose, which does not require insulin for metabolism, mesquite helps maintain a constant blood sugar level for a sustained period of time. It is high in protein (11–17%).

Cacao is one of the highest antioxidant foods in the world. It is also one of the richest sources of Magnesium out of all foods, essential for reproductive health. Cacao is high in Iron ( 314% times the U.S. RDA) and Zinc, Manganese and Sulfur for cellular repair and growth. It also contains Chromium, an essential trace mineral, needed for blood sugar health. It contains Tryptophan the amino acid needed to produce Seratonin and Melatonin.

Hemp - Hemp seeds are considered by leading researchers and medical doctors to be one of the most nutritious food sources on the planet. Hemp seed is packed with 33 percent pure digestible protein It contains the full spectrum of amino acids in ratios best suited for human assimilation. Hemp protein is comprised of 66 percent high-quality edistin protein. It contains essential minerals including Iron, Calcium, Magnesium, Phosphorus, Potassium and Sulphur. It is high in dietary fiber. Hi levels of vitamin E. 45% Essental fatty acids, the best balance of omega 3, 6 and 9.

Fo-Ti (He Shou Wu) - nourishes the glandular, nervous, and skeletal systems. This herb is reputed to enhance the health of the liver and kidneys. It is known to help improve health, stamina and resistance to diseases. Its strength comes from its remarkable ability to cleanse the body by cleaning the kidney and liver, which in turn clean the blood. Fo-Ti is extremely rich in potent antioxidants and in antioxidant-potentiating molecules. Fo-Ti stimulates the body’s innate ability to efficiently clear superoxide from the body, the highly reactive free radical. Fo-Ti protects our cells from DNA damage, lipid peroxidation, ionizing radiation damage, and many forms of progressive cell degradation. It is is extremely rich in zinc. The lecithin content of Fo-Ti would also help lower high cholesterol!

Hawthorn – is the best-known herb for the heart in western herbalism. It has been used for centuries with great success, especially in Europe. Hawthorn is valued for nourishing blood pressure and circulation. Hawthorn is also considered a mildly calming herb for the nervous system--an appropriate bonus considering that stress and nervousness often accompany cardiovascular problems. Since the late 19th century, hawthorn has been used successfully for various diseases of the cardiovascular system, including angina pectoris, functional heart disease, arhythmia, early manifestations of circulatory insufficiency of advanced age, and as a heart tonic to regulate circulation. It acts as a powerful free-radical scavenger, protecting the heart against the harmful effects of lessened oxygen. it is reassuring that nature has provided such a gentle yet effective cardiovascular protector as hawthorn.

Taheebo/ (Pau D'Arco) - Contains Laspachol – an element noted for its antitumor and are anti-fungal and Xyloidin – an antibiotic with viricidal properties active against all germ types and staphylococcus. Pau d’arco is an excellent herbal source of calcium and silica. It has been used to treat fungal infections, inflammatory skin conditions, leukemia, dysentery, jaundice, ulcers herpes, arthritis and hardening of the arteries. Moreover, Pau d'Arco is confirmed as being an antiparisitic against various parasites including: malaria, schistosoma, and trypanosoma. It is also suggested that this plant is useful in treating other medical conditions, amongst which are fibromyalgia and lupus.

Schizandra – is a berry that has profound adaptogenic properties and gently but efficiently supports the liver. Schizandra stabilizes the blood glucose and blood pressure and has beneficial effects in lowering cholesterol levels. It invigorates the RNA-DNA molecules to reconstruct cells, enhance the fitness of the adrenals as well as generate vitality in the body. It contains antioxidants that help in protecting the liver and has been found to speed up the detoxification of carcinogens via the liver. Early studies have demonstrated that Schizandra can reverse the negative effects of stress on the immune system and it has a positive effect on supporting hormone related cardiovascular disorders. A recent study found that Schizandra to be a potent support for sufferers of conditions such as ADHD, Alzheimer’s disease, poor attention and brain fog.

Barley Grass –contains easily absorbable proteins, 18 amino acids including the eight essential ones, plus chlorophyll for blood health and detoxification. It contains outstanding amounts of vitamins and minerals, including phosphorus, manganese, zinc, beta carotene, B1, B2, B6, C, folic acid, and pantothenic acid and digestive enzymes that help counter the ageing process. Finally, studies have shown that barley grass helps fast repair of DNA.

Medicinal Mushrooms – contain more of the immune-stimulating polysaccharide, beta-glucan. They have anti-microbial, anti-viral and anti-tumour properties. They also help reduce, cholesterol and blood pressure levels. They assist blood sugar regulation, help strengthen the liver and have a strong anti-viral action. They are rich in amino acids, vitamins and minerals like potassium, calcium and magnesium and antioxidants and are one of very few natural vegan sources of vitamin B12.. Medicinal Mushrooms have shown a wide range of adaptogenic properties, including anti-cancer properties, ability to oxygenate the blood efficiently, speeded regeneration of the liver, a sedative and calming effect, free-radical protective effect, radiation protective effect, reduction in sensitivity to allergens and anti-hypertensive effect.

Tulsi - is often referred to as the “queen of herbs”, as it promotes longevity and enhances well-being. It is known for its rich antioxidant properties. It contains hundreds of compounds that work together to create strong antioxidant, anti-bacterial, anti-viral, and immune-enhancing properties. It promotes heart health by lowering cholesterol and high blood pressure. It reduces the negative physical and psychological effects of stress. It increases the body’s efficiency in using oxygen, which improves stamina, strength and endurance. It promotes respiratory health. It helps with digestion and gastrointestinal problems. It reduces cell and tissue damage from sun rays, radiation therapy and other radiation sources and it relieves inflammation. Tulsi is also wonderful at relaxing the nervous system to help with restful sleep.

Chasteberry - has the effect of stimulating and normalizing pituitary gland functions, especially its progesterone function.The greatest use of Chasteberry lies in normalizing the activity of female sex hormones. It is especially beneficial during menopausal changes and infertility. Chasteberry improves the production of progesterone, increases luteinizing hormones and prolactin, and inhibits the release of follicle stimulating hormone. A study conducted in London (double blind study) showed a 60% group reduction or elimination of PMS symptoms such as anxiety, nervous tension, insomnia, or mood change.

Rhodiola - has been the subject of more than 180 studies, which have shown it to increase thyroid function, help the body adapt to stress, reduce fatigue, boost strength, improve brain function, and lift mood. It enhances the immune system and helps the body to overcome stress. In Tibet it has always been known for its ability to stimulate blood circulation and purify the blood and increase energy. In Mongolia, doctors use this plant as an aid in the treatment of tuberculosis and cancer. In Russia, traditional healers from time immemorial have successfully used in the treatment of broncho-pulmonary diseases, to support the heart and prevent heart attack. It also has antidepressant properties and increasing intellectual functions. Rhodiola also helps to stabalize the blood glucose level, as well as protecting the liver and it has a strong antioxidant protection at the cellular level. It also harmonizes sexual function in both sexes.

Contraindications: Please do not use while on any form of medication without the approval of your health care provider. 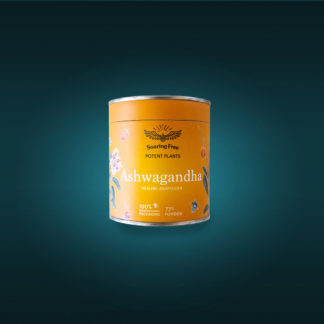 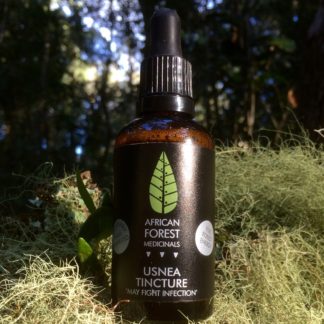 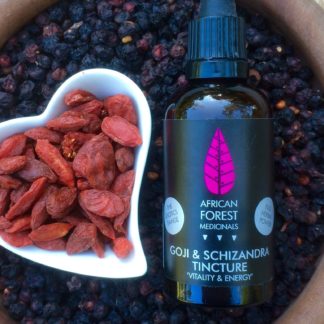